skip to main | skip to sidebar

I got Assassin's Creed II for the PS3 at the end of November and I am ready to share the secrets I have learned with you. I created video tutorial for the mission "What Goes Around Comes Around" which is the first mission in Tuscany. Take a look at it and hopefully it helped you with the mission. View it here
Posted by TGell at 7:09 PM 4 comments:

As the holiday season approaches, many people take the time to ponder what and who they should give thanks for. This year has made me especially thankful for many things. I am thankful that I have a very supportive, understanding wife that I know will back me and be with me through thick and thin. I am also thankful that I have a great support system of family and friends. With all of the problems many people are facing today, these are the things that people need the most, and some sort of income of course! Having served in Iraq and seeing first hand how many around the world live has made me appreciate the little things that much more we here in America have. I truly believe that we live in the best country in the world today, and that if more people can see that and be proud of it, we can help make the world along with our country a better place. I hope that everyone who reads this takes the time to sit back and look at the positives they have in their lives and thank those who they have to be grateful for. Now to help you with feeling thankful, I will bring you the gift of new game information. As most of you know, Assassin's Creed 2 and God of War 1 and 2 Collection have been out since November 17th. God of War has come out to refresh gamers about the back story to the upcoming third installment, God of War III, by placing the first and second games on one blue ray disc for the first time. This should be a great gift for any gamer who like adventure and puzzle solving. I am eagerly awaiting the release of God of War III that should hit shelves sometime in February of next year. I have written about Assassin's Creed 2 in an older post located in the October posts. Coming to the video game world is Avatar, the video game based on the anticipated new movie from James Cameron. I really don't know how to explain this game well, but what I have read indicates that it will follow the movie very closely and emerge gamers into the world of Pandora. On December 17th the greatly awaited arrival of Final Fantasy XIII finally comes. This game will take the graphics and performance of the PS3 to a whole new level, and thrill new and returning gamers to the world of Final Fantasy. I hope everyone has a great Thanksgiving and enjoy it with the ones they love.
Posted by TGell at 7:55 PM No comments:

I found a great video game wiki called Wikia Gaming. It hosts many different wiki sites dedicated to different games all sorted by genre of games. This is a must for gamers who want to contribute to a community on their favorite game. I really didn't see any help with games such as walkthroughs or cheats, but if you are looking to express your love of a game with people who feel the same then I really recommend this wiki for you. Let me know if you have found others that you feel would be a great addition.
Posted by TGell at 5:03 PM No comments:

It has been an exciting week for PS3 and gamers across the world. Uncharted 2 Among Thieves came out this past Tuesday and has had nothing but great reviews. This game has everything down perfect, great story, awesome graphics, great gameplay. No one could ask for anything more. Battlefield Bad Company 2 is coming out sometime next year, along with the game probably more than 80% of PS3 owners have been waiting for (that number includes myself) God of War III, which will finally be released in March of 2010. This has game of the year written all over it. More to come on this later. In other news Netflix is coming soon to the PS3 with streaming movies straight to your PS3 with no extra cost to customers. Modern Warfare 2 is coming closer to release and has amped its own hype with a sweepstakes to win real life replicas of vehicles and other items from the game. Can't wait for the holiday season to kick off and get my hands on these games and more to come.
Posted by TGell at 7:43 PM No comments:

I have just read one of the most helpful how-to guides ever. All a Twitter: A Personal and Professional Guide to Social Networking with Twitter by Tee Morris is exactly what the title states, a personal and professional guide to Twitter. Tee Morris is an experienced user of Twitter starting his own Twitter page in 2007 and hasn’t showed a sign of slowing down. Morris takes you on a well laid out and detailed journey through the world of Twitter, a social networking forum that allows people to express what they are doing at that very moment in 140 characters or less. Morris not only explains how to set up a Twitter account, but he also shows the reader the ins and outs of the network, from what Twitter is and what it isn’t, to how to create a successful account and build a great social network. He explains third party applications and how they make your Twitter experience that much more enjoyable and easy. Morris also shows how to use shortcuts on Twitter, like how to create hash tags and how to easily find friends on Twitter. Morris shows not only how to find friends, but also others who share your same interests and how to make great connections for professional reasons. I greatly enjoyed the layout of the book. The author wrote and arranged the book in logical order. First, he explained the background of Twitter; next he takes you through the steps of how to create an account. After creating your account, Morris shows how to use third party applications and how to take Twitter on the go, and implement it into your other social networking tools like Facebook and MySpace. In addition to all the ways that Twitter improves social networking, he also shares the downfalls of Twitter, like not being able to fully express yourself within 140 characters, but shares tips and advice how to get around the cons and use Twitter to its full potential.


This book is a must read for anyone who is interested in using Twitter. Like I stated in my first sentence, I have never read another book that went into so much detail about one topic. It’s quite ironic to think that like Twitter, this book gives out so much information with only using 268 pages. Anyone who initially picks up this book will be surprised how much they can learn from 268 pages. This book is also a great read for anyone who is just generally interested in social networking and the tools that are out there to use. People with no prior knowledge and people who have used Twitter for a whole year can read this book and learn an impressive amount of facts about Twitter.

When I first picked this book, I had heard of Twitter but I had never visited the webpage or ever used it as a social networking tool. After reading just the first 60 pages I felt I was more than capable of knowing what Twitter should and shouldn’t be used for, how to create an informative and original account and profile. I feel able to fully express myself within 140 characters and follow others who do the same. After finishing the first 100 pages, I had a great knowledge of third party applications and their pros and cons. After the whole book I now feel that I could write my own book about Twitter! I thoroughly enjoyed the book from beginning to end and gained a lot of knowledge on a very useful tool in the social networking universe. I would highly recommend this book to anyone who wants to use or learn about Twitter.

Can't Wait for the Holiday Season ....

I can't wait for the holiday season! So many great things are coming out, Assasin's Creed 2, Lego Rockband, and coming out this month alone are Need for Speed Shift, Brutal Legend, and Uncharted 2. I played both demos for Brutal Legend and Need for Speed Shift recently and I am very impressed by both of them. Now don't get me wrong, I know Brutal Legend is in no way going to win game of the year, but it is a great game if you like blood, gore, Jack Black, and hilarious one-liners. Graphics are nothing special but still capture the story quite well. Gameplay is great with simple button combos for combat, switching between range attacks with the guitar and melee attacks with the axe. Jack Black makes for a great hero to this game and is non stop with the quick one-liners. This game is a definate play all the way in my book.

Need for Speed Shift is finally the revamping that the franchise needed. Amazing details in the cockpit view putting you in the driver seat of real vehicles with real specs, no more going 200 miles an hour in a honda civic that you upgraded to the extreme. Realalistic drivng feel and road conditions, the only down fall is the graphics with damage done to the vehicles is a little boxy. This game has pushed racing to the edge without going over.

Last thing, if you are a fan of the music genre of games then Lego Rockband is coming out December 12. A great family addition to the group of Rockbands already out that mixes the fun and great song selection of Rockband with the comicial view of lego people playing the music and going crazy in the crowd. Queen, Blink 182, and Pink are just some of the artist listed out of the full song list posted on 1up.com. This shows the mix of songs for everybody in the family. Also before I forget, Playstation has started their own blog at blog.us.playstation.com. Check it out for up to date info on new games and previews. I will also add it to my link list for future reference.
Posted by TGell at 4:51 PM 1 comment:

This post is more of a question than anything else. The question I pose to you all is, do you have trouble getting your significant other to share your passion for gaming? I have had an issue getting my wife to play for years, playing against AI does get boring after all. I have found that if its a woman you are trying to get involved then the best types of games are fighting games, racing games, and party games. Games like Tekken or Mortal Kombat vs DC Universe, the Need for Speed franchise, and the Mario Party games are among the most popular. If your boyfriend or husband doesn't want to play then I would question their manhood ... just kidding! For male's fighting, sports, and shooters are a sure bet. Share with all of us your stories of triumph or defeat of getting someone to play with you.
Posted by TGell at 4:12 PM 3 comments:

Get The Live Feed! 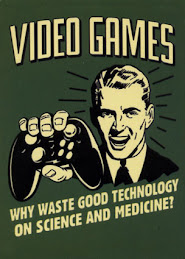